Psoriasis is a painful, itchy and burdensome skin condition affecting 7.5 million Americans today. Up to 40 percent of people with psoriasis experience joint inflammation that produces symptoms of arthritis. This condition is called psoriatic arthritis.

There is no cure for psoriasis. Usually when someone is diagnosed with psoriasis they are treated with a pharmaceutical based cream from their doctor with the warning that the condition can come back at any time and relief is temporary. Or in more severe cases, conventional pharmaceutical drugs used to treat psoriasis are typically systemic immuno-regulating agents that involve many side effects such as fever, diarrhea, liver dysfunction, and increased chance of infection.

Cannabis infused topicals are able to treat numerous skin conditions including psoriasis. Cannabis, specifically cannabidiol (CBD) effectively deals with the significant cause of this skin condition while avoiding the negative side effects of pharmaceutical drugs. Furthermore, CBD based topicals do not produce a psychoactive effect and are safe to use. 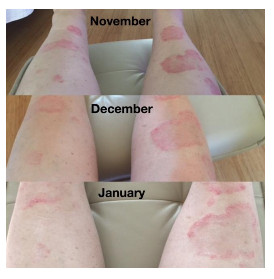 Over the course of three months, a Cannaisseur customer began using Aryn’s Essentials Massage Oil on her legs that have been plagued with psoriasis for decades. She became used to wearing pants 12 months out of the year because of the unsightly scaly patches. As you can see from the photos submitted, her psoriasis dramatically improved with just a few drops of the Aryn’s Essentials oil used daily over the course of a few months. Needless to say, CBD infused topicals provide bonafide therapy and relief for psoriasis patients. For more information on Aryn’s Essentials products, please visit www.cannaisseurbrands.com.

Cannaisseur Brands represents premium medicinal cannabis products as a result of using high quality natural ingredients grown in the United States. Our products are 100% compliant with all state regulations (Prop 215 and Prop D)

Our mantra is Connect the Community, which is why membership in our associations has no charge for those actively practicing the pursuit of Wellness. Nationally and Internationally, all are welcome to join.